Ground was broken for the new Woodstock Outlet Mall last week.  The 370,600-square-foot initial phase of the center is scheduled to open in August 2013 and will be called The Outlet Shoppes of Atlanta.  Located off Ridgeway Parkway and the new I-575 entrance, the outlet mall is a nice addition to Woodstock.  Stores signed on at The Shoppes include  Nike, Saks Fifth Avenue OFF 5TH, Brooks Brothers, White House | Black Market, Guess, Michael Kors, Under Armour, Puma, Converse, Cole Haan, Vans, Le Creuset, Levis, Naartjie Kids, Talbots and Carters. 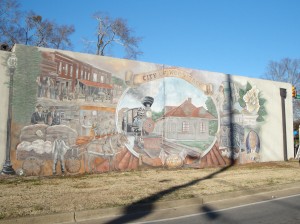 {[}]{[}]The center will feature covered walkways and landscaped courtyards to maximize the comfort and convenience of shoppers. Its design blends traditional architecture with lively features childrenâ€™s play area and a center court complete with fountains and fireplace to create a festive atmosphere for shoppers and other visitors to the center. The site will accommodate an additional 30,000 square feet of outlet shops and also features eight out-lots for restaurant and other uses.{[}]{[}]According to the press release from CBL and Associates, one of the developers, â€œThe Outlet Shoppes at Atlanta represents the new incarnation of the outlet shopping experience. It is located much closer to the residents of metro-Atlanta than existing outlet centers and its design makes shopping at the center much easier and more pleasant,â€ said Gary J. Skoien, chief executive officer of Horizon Group Properties. â€œWe also expect to draw shoppers from Tennessee, Alabama and other parts of Georgia. The development and operation of the center will generate substantial economic activity in Woodstock and we are appreciative of the efforts of the Woodstock City officials in making this development a reality,â€ said Skoien.{[}]{[}]While we have been writing about the progress of this development for some months now, breaking ground is a huge vote of confidence for the economy and will be a significant boost to the economy of Woodstock.{[}]{[}] {[}]{[}]