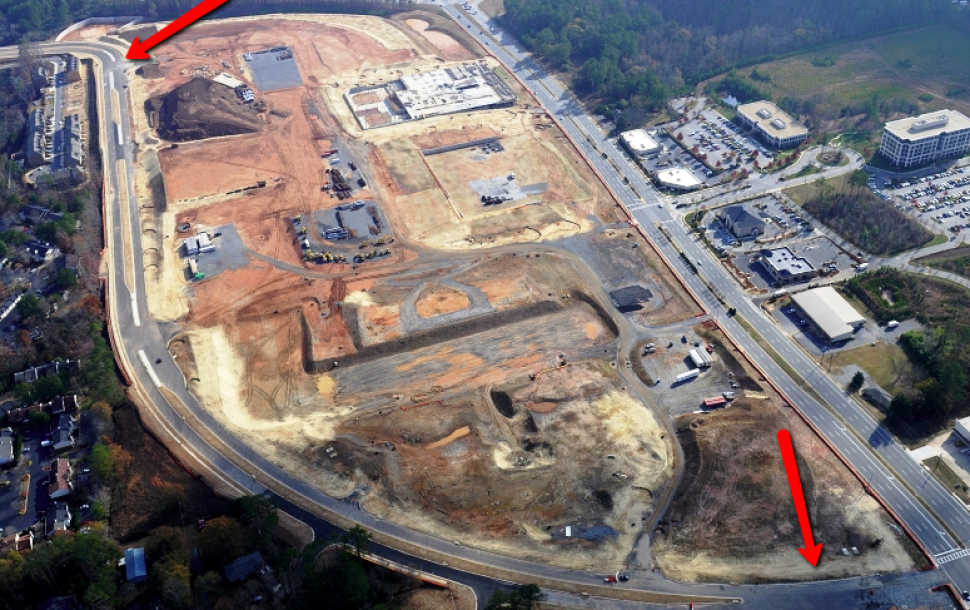 Alpharetta has apparently finally found a solution that will allow them to quickly open the last leg of Westside Parkway, an arterial road that parallels GA400 just west of GA400 and that should help with traffic congestion on both Hwy 400 and Hwy 9.  According to www.NorthFulton.com, the city has made progress with the two property owners controlling this stretch of roadway and may now have the last leg of Westside Parkway before the end of the year.{[}]{[}]According to the article, most of the 1.25 mile road is owned by North American Properties (NAP) as a result of their purchase of the Avalon development (formerly known as Prospect Park). Prospect Park was owned and planned to be developed by (Stan) Thomas Enterprises before it fell into bankruptcy at the beginning of the recession. If you’re a local or travel the area, you’re well aware of the abandoned parking deck eyesore along Old Milton Parkway. The unfinished stretch of Westside Parkway lies behind the structure as noted by the red arrows in the aerial photo. 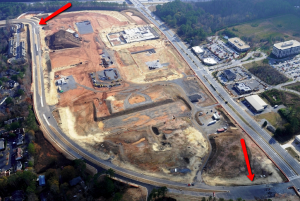 {[}]{[}]However, there is a 2nd parcel of 10 acres that contains a 1/4 mile stretch of the roadway. This parcel, according to Alpharetta City Administrator Bob Regus, was owned by Stan Thomas personally and separately of the Prospect Park tract that was purchased by NAP from the Thomas Enterprises bankruptcy. So even though the city had been working with NAP to open the road, Regus stated “That stretch of road and the 10 acres that surround it belonged to him and not his company. So we had to negotiate that deal with him separately.”{[}]{[}]As a result of those negotiations, Alpharetta will pay Thomas $3.25M for the 10 acres. Regus contends that the payment is not such a bad deal since the city would have had to condemn the entire 10 acres anyway to gain control of the roadway. According to City Attorney Sam Thomas (no relation to Stan) the city is in effect paying for the improvement made before the project went belly-up. Alpharetta is getting some outside contributions towards the $3.25M; the North Fulton Community Improvement District will kick in $789K and the GA DOT has set aside $800K for the project.{[}]{[}]NAP has separately negotiated with Alpharetta to turn over its mile-long stretch of the parkway in return for Impact Fee credits in an amount to be determined by an agreed upon formula for the value of the road and right of way.{[}]{[}]Okay, I must stop here to scratch my head in confusion. I’ve been following closely the building and abandonment of Westside Parkway for some time now as you can see from reading previous posts on this subject. This is the first I’ve heard of Stan Thomas still having ownership of any of the land. And apparently Alpharetta only announces Thomas’ involvement after the negotiation has been completed. We did at least know the city was negotiating with NAP for their parcel.{[}]{[}]So why the secrecy? Or apparent lack of transparency? I’m not saying there is anything wrong going on here (and I truly don’t believe there is any wrong-doing on the part of Alpharetta here) but I just don’t understand why the Stan Thomas ownership hasn’t come out before. I’m a Milton resident, so I don’t have a dog in the hunt, but I have a hard time chewing on the $3.25M lump of coal Stan Thomas has delivered to Alpharetta citizens this Christmas.{[}]{[}]On the bright side, Alpharetta and North Fulton commuters will benefit from this deal in terms of traffic relief- and hopefully very soon since we’ve been told that the dormant road can be quickly finished and opened.  We’ll continue to watch and report on the road to keep you informed- so, stay tuned!