If you haven’t been thru Downtown Alpharetta lately, swing by and check it out. Town center east of Main Street has been demolished excepting the Courthouse and work on the new City Center continues almost daily. And if you take Exit 10 off GA400, you’ll realize that the decrepit abondoned partially built parking lot on the new Avalon site has been demolished and heavy grading is underway in preparation for Avalon. (Editor’s note: Most of the remainder of this post is from a recent AJC article regarding Avalon financing.) 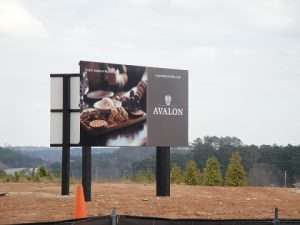 The Avalon mixed-use project planned in Alpharetta has obtained $126.5 million in loans to start vertical construction for its first phase, the projectâ€™s developers said Friday. Avalon, a North American Properties development, will include 500,000 square feet of high-end shops and restaurants, for sale and rental residences, hotels and office space. The $600 million project along Old Milton Parkway and Ga. 400 is expected to open its first phase in October 2014. According to North American Properties (NAP), the development will become the Southeastâ€™s “preeminent experiential development. Avalon will be “a place where specialty retail, entertainment, restaurant, residential, office, hotel and public spaces come together to create a truly unique destination.” Along with amazing shopping and dining options, Avalon will have a large state-of-art movie theatre and will boast an ice skating rink similar to the one at Rockefeller Center. According to MortgageOrb, since receiving zoning approval from the Alpharetta City Council in April 2012, NAP has received commitments from 75 retail and restaurant tenants including Giovanni Di Palma’s Antico Napoletana, Bantam + Biddy by Chef Shaun Doty, Tommy Bahama, Vineyard Vines, Exhale Spa, West Elm, Kinnucan’s Specialty Outfitter, Sage Boutique, Free People, Janie and Jack, C. Wonder and L’Occitane. In addition to the retailers listed above, Avalon has executed leases with Anthropologie, Arhaus, Athleta, Banana Republic, Bocado Burger Bar, Cru Food and Wine, Destination Maternity, Dry Bar, Everything But Water, Fab’rik, a new Chef Ford Fry concept, Flywheel, GAP, Gymboree, Kona Grill, Lululemon, Luxury Nail Spa, Marlow’s Tavern, Mitchell Gold + Bob Williams, Orvis, Paper Source, Pinkberry, PNC Bank, Regal Cinemas, Ted’s Montana Grill, Van Michael Salon and Whole Foods. Alpharetta is poised to become a hip, vibrant downtown destination based on these projects and other improvements made over the past few years, so go check it out!
share post to: