Milton GA now has a new (well, refurbished really) facility for summer camps but also available for community outings such as parties, family reunions, company outings, etc. The Bethwell Community Center has been recently renovated and is now available to both residents and non-residents for a nominal charge. The building has a large, open area that seats up to 55 and has an area for food prep, including a refrigerator, microwave and sink.  There is also a restaurant, playground, large front porch and parking for 17 vehicles. 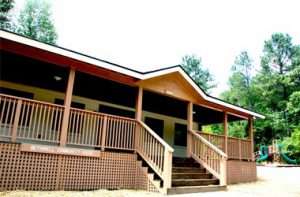 {[}]{[}]The facility is available for 3 hour periods at $120 for residents and non-profits or $300 for the full day – non-resident and business rates are $187.50 for the 3 hour block; this group cannot reserve the facility all day. The rules for renting are common sense and easy to follow; however, you may want to note and know up-front that alcohol is strictly prohibited on the property.{[}]{[}] {[}]{[}]

{[}]{[}]Bethwell Community Center is conveniently located at 2695 Hopewell Road in Milton GA (near the intersection of Hopewell Rd- Francis Rd and Cogburn Rd) and is also being used for multiple summer camps offered by Milton. According to Cyndee Bonacci, Director of Parks and Recreation for Milton, the new facility will now also fill a void in the community since before “we did not have a facility to accommodate rentals”.{[}]{[}]You can find more detailed information and a reservation form here. I’ve posted before and after photos of the property and have also seen interior photos of the facility.  Based on what I’ve seen, I think this is a nice addition to the city’s recreational assets, which are really lacking.  This is not a criticism of city leadership but a result of the city of Milton being in its infancy that hopefully Milton city leaders will aggressively address going forward.{[}]{[}]
share post to: