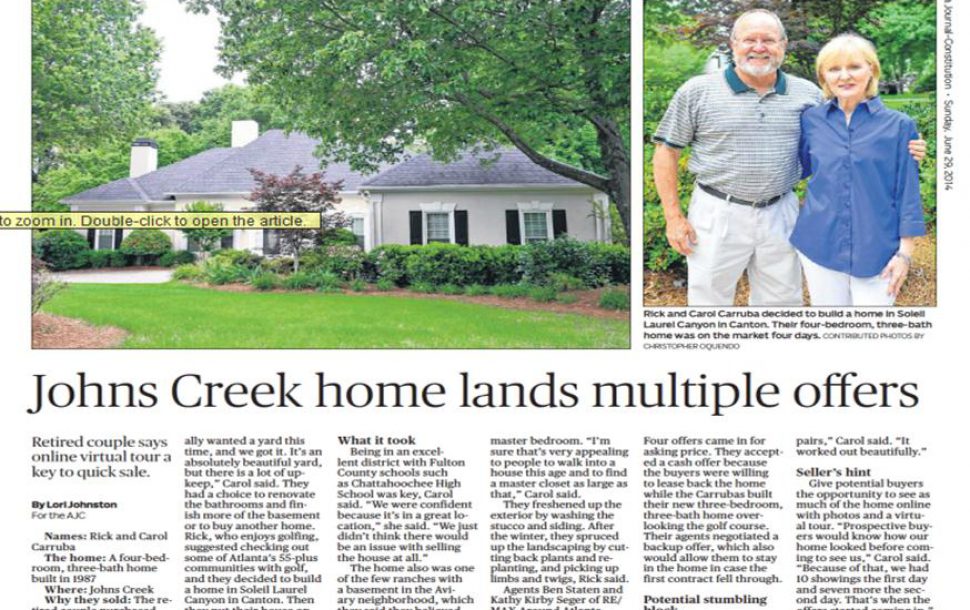 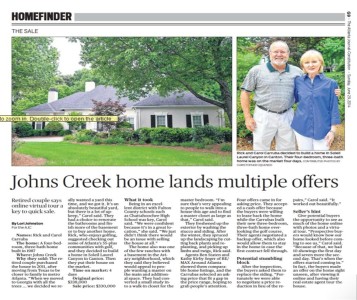 We are honored and proud to have the Carruba’s story told by the AJC.  It’s been a pleasure working with them.

Reprinted from the Atlanta Journal and Constitution, Sunday, June 29, 2014. By Lori Johnson

Why they sold: The retired couple purchased the house in 2011, after moving from Texas to be closer to family in metro Atlanta. “When we moved to Georgia with all the trees … we decided we really wanted a yard this time, and we got it. It’s an absolutely beautiful yard, but there is a lot of upkeep,” Carol said. They had a choice to renovate the bathrooms and finish more of the basement or to buy another home. Rick, who enjoys golfing, suggested checking out some of Atlanta’s 55-plus communities with golf, and they decided to build a home in Soleil Laurel Canyon in Canton. Then they put the house on the market.

Time on market: 4 days
Original price: $338,000
Sale price: $330,000
What it took:  Being in an excellent district with Fulton County schools such as Chattahoochee High School was key, Carol said. “We were confident because it’s in a great location,” she said. “We just didn’t think there would be an issue with selling the house at all.”

The home also was one of the few ranches with a basement in the Aviary neighborhood, which they said they believed would appeal to people wanting a master on the main and additional space. They had converted a small study into a walk-in closet for the master bedroom. “I’m sure that’s very appealing to people to walk into a house this age and to find a master closet as large as that,” Carol said.

They freshened up the exterior by washing the stucco and siding. After the winter freeze, they spruced up the landscaping by cutting back plants and replanting, and picking up limbs and twigs, Rick said.

Agents Ben Staten and Kathy Kirby Seger of RE/MAX Around Atlanta showed them comparable home listings, and the Carrubas selected an asking price that fit a gap in the price range, hoping to grab people’s attention. Four offers came in for asking price. They accepted a cash offer because the buyers were willing to lease back the home while the Carrubas built their new three-bedroom, three-bath home overlooking the golf course. Their agents negotiated a backup offer, which also would allow them to stay in the home in case the first contract fell through.
Potential stumbling block

After the inspection, the buyers asked them to replace the siding. “Fortunately we were able to negotiate a price reduction in lieu of the repairs,” Carol said. “It worked out beautifully.”

Seller’s hint:  Give potential buyers the opportunity to see as much of the home online with photos and a virtual tour. “Prospective buyers would know how our home looked before coming to see us,” Carol said. “Because of that, we had 10 showings the first day and seven more the second day. That’s when the offers started coming in.” In fact, the buyers made an offer on the home sight unseen, after viewing it online and having their real estate agent tour the house.